I’ve been a little quiet on here and on my Instagram account recently. But I’ve still been busy.

I recently created a Facebook page for my art. Something I was a little reluctant to do, concerned that yet another social media channel would suck my time. However, it has been worth it. My partner Jess has helped spread the word, and in the first couple of weeks, I gained over 150 likes/follows! I just need to crack on with my painting and actually have something to post on there now! Head over there and hit like if that’s your thing.

A lot of my time has been taken up with the technical aspects of art – the behind the scenes things that don’t make for the most exciting posts on social media.

I’ve been investigating the archival aspects of working with oil paints. Things like discovering that linseed oil from the paints can seep through Gesso into the canvas fibres which will eventually lead to rotting. Some of my pre-primed canvases don’t seem to have enough Gesso layers to prevent that and I’ve noticed some seepage already. That was a bit worrying to discover. I then found out that the best practice is to ‘size’ the canvas using PVA. This creates a seal to protect the canvas and then a primer layer such as Gesso can be applied on top. So now I’ve got to size and prime canvases myself before painting.

Another problem is painting onto a Gesso-primed surface causes an oil painting phenomenon called ‘sink’. This is where the oil carrier from the paints gets sucked into the Gesso layer making the first layer of paint very dry and matte. Subsequently, this is hard to work with and destroys the soft, buttery consistency that oils are known for. I found that this can be overcome by using a ‘ground’ which is similar to Gesso, but oil-based. I’ve ordered a tin and am looking forward to painting on this new surface.

Longevity of Painting Oils on Canvas

I’ve some concerns about the longevity of painting oil on canvas. I know many artists do this, but it’s a fact that oil paints can become brittle when dry and a flexible surface such as stretched canvas can contribute to the paint cracking. Maybe this is a long-term problem that won’t manifest until many years after the painting is finished, but I can’t stand the thought of selling my work only to have it deteriorate earlier than it should and will do everything I can to prolong the life of my paintings.

I purchased a range of sizes of reinforced sanded Paulownia wood panels to try and overcome the issues associated with painting on canvas. Out of the box, they look gorgeous. Whilst they will take some time to prepare, having to be sized, primed, dried and sanded before working on them, the ultra-smooth surface should be a boon to achieving the realist style I mentioned in my previous post.

I’ve also been busy spraying the reverse side of my glass palettes with neutral grey paint. I previously stuck a sheet of white paper on them but found that neutral grey would give me a better view of the colours being mixed on the palette. This has been hard to do as every weekend for the past three weeks we’ve had wind and rain from three named storms.

So all in all, a busy week with lots of progress, but with very little to actually show. Here’s to getting some paintings finished and posted! 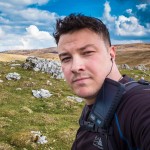 Chris Richards is a landscape artist based in the upper Swansea Valley village of Ystradgynlais.
View all posts by Chris →

Don’t forget to check your spam folder and it helps to add info@chrisrichards.art to your whitelist to make sure you get the emails.

We use cookies to ensure that we give you the best experience on our website. If you continue to use this site we will assume that you are happy with it.Ok